Excerpt ("We are.....having been" is from previous page in Diary): “We are expecting marching orders all the time, having been ordered to be in readiness to march at an hours notice. What our destination is to be, of course we do not know.”

Indeed, Union General of the Army of the Potomac "Fighting Joe" Hooker, began the large-scale movement of his army north on June 25th (the date this letter was written), in pursuit of General Lee's Confederates, who by that time were already in Pennsylvania. General Lee made this move north, after having beaten Hooker at Chancellorsville in May, in search of supplies, so as to give Virgina farmers sufficient time to harvest their crop out of the hungry gaze of both Northern and Southern armies. He also sought an end to the war, thinking that if he had a convincing victory on Northern soil, European powers would come to his aid, and Lincoln would sue for peace. So Lee, using the Blue Ridge Mountains to screen his movements, crossed the Potomac in mid-June. Hooker, unsure of Lee's intentions, was late to move north, but upon hearing that the Rebels had crossed the Potomac, uprooted his army and sped towards Pennsylvania. Many soldiers wrote fondly of the march. After leaving Virginia, they were finally in friendly territory, away from the scowls of onlookers and barren, war-ravaged countryside of Virginia. Rush Cady's 97th NY was a part of the First Corps, headed by the revered General Reynolds (or Gen. R as Rush referred to him). The First Corps was the first Corps of Union infantry to enter Pennsylvania, and the first onto the Battlefield of Gettysburg. 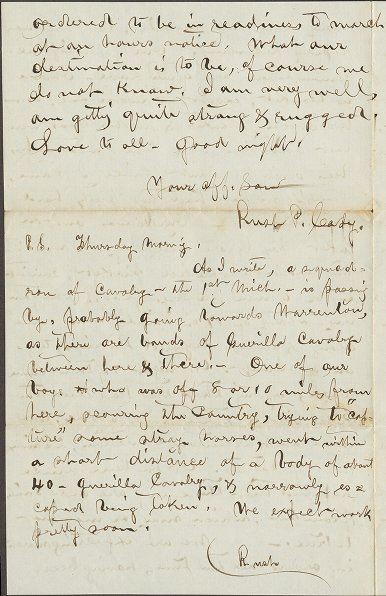 Arriving on the battlefield, the 97th New York Infantry must have witnessed quite a sight. They arrived north of the town at noon, just in time to see Rebels (General Rhode's 8,000-man division) massing on Oak Hill, a rise north of their position. The problem was that the 97th New York, along with the rest of Baxter's Brigade and Robinson's Division, was aligned on Oak Ridge, with their right flank open to the advancing Confederates from Oak Hill. Luckily for the 97th, they were positioned on the left of Baxter's line, so their flank was not so exposed. Their fight came when Iverson's Brigade, part of Rhodes' division, marched south in a depression in front of Rush and the 97th NY on Oak Ridge, with their flank open to Union rifles. Accordingly, the 97th NY, who had the high ground with the rest of Baxter's Brigade, opened fire upon the rebels of Iverson's Brigade. Iverson's men fell in droves, and many of those not killed by the volleys raised the butts of their rifles in surrender. The Union soldiers on Oak Ridge repulsed the wave of Confederates sweeping south from Oak Hill, but another would come that proved too strong for Union's precarious position north of the town. Despite the Confederate victory on the First Day, the Union soldiers on Oak Ridge dealt a heavy blow against Rhodes' division, putting them virtually out of commission for the rest of the battle. 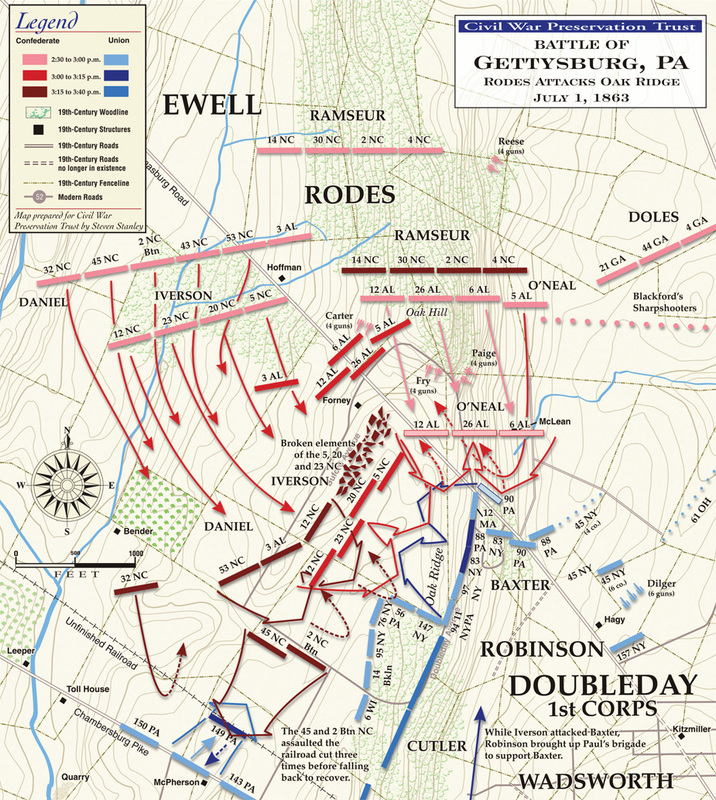 This is what Rush saw from his position on Oak Ridge, only the depression in front of him was filled with marching Confederates from Iverson's Brigade. It was in this lowland where hundreds of Confederates were mowed down by Union firing, soon after named Iverson's Pits. Here is where Rush Cady's 97th NY Infantry was most famously involved at the Battle of Gettysburg on July 1, 1863.

It is said that the ground at Iverson's Pits would glow in the nights following the battle, where so many men died and were buried. 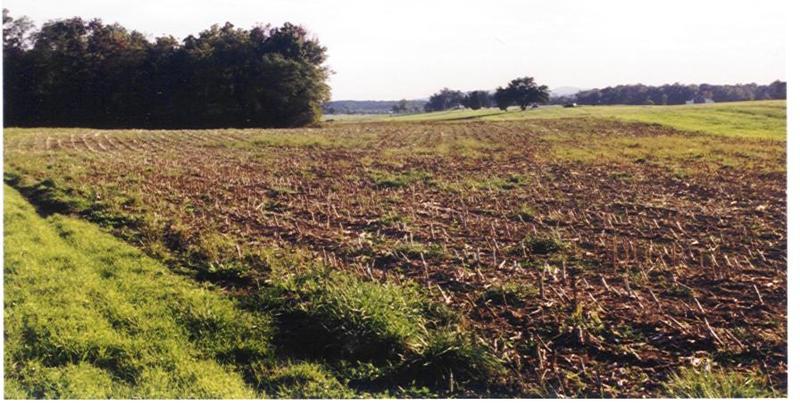 After being severely wounded at Gettysburg, Rush lingered for a few weeks in a hospital. Aware that his time was coming to an end, Rush had a telegraph sent to his mother, asking her to "come immediately." Luckily, Mrs. Cady arrived in Gettysburg in time to spend time with her son before he passed. This is the telegraph. 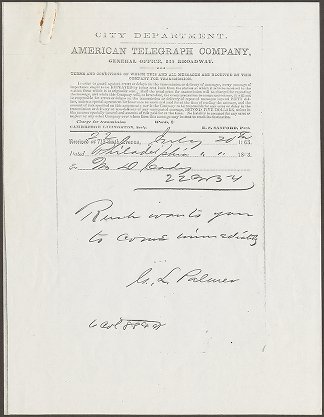 I leave Rush a few minutes to write. Mrs. Hill sits by him. I hardly know what to say. We moved him yesterday, he stood, is as wel as we expected but he was very miserable last night. His nerves all unstrung. You can have no idea how low and weak he is. we fed him wine and stimulants constantly. lathered him off brandy and liquor oftern we keep doing constantly. the Hospital Steward stayed last night with Gustavus, he is one of the kindest and best men from Boonville. THe Hospital physician came too and Co. resident one had me expect Dr. Chambers today. We are doing everything we can to make him almost as comfortable as he....." 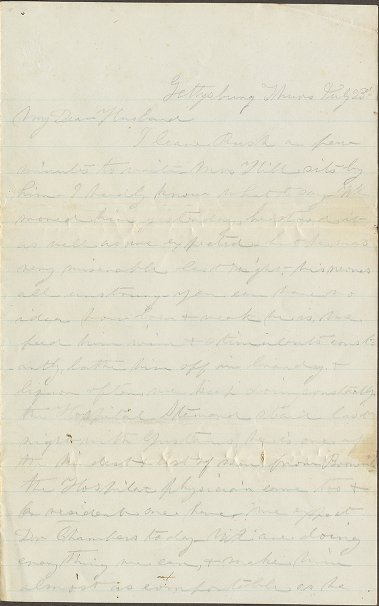 "...could be anywhere from home. but my heart aches so sometimes, we have no ice now, he said this morning "I want a piece of ice as large as the end of my thumb," how when we have it at home so plenty! Still we have lemonade, quite cool. He complains not a word, so good to take his medicine. He said to me yesterday, "kiss me mother, pray for me," said his mind "had been dark and cloudy considerable but the Lord has always been with him when he was sick. He talks very feeble. Oh my husband, can we part with our dear brave boy- may God give us grace to hear all we may be called upon to do- Pray for me and him too, husband mothers and child. But he may live we have great hopes yet. So many of his soldier brothers so kind and the people too. I talked with..." 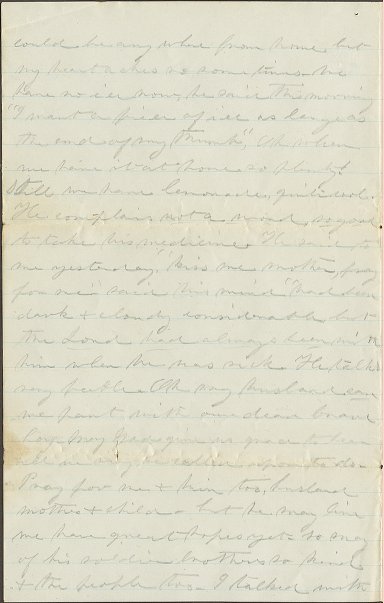 "...the lady into whose house he was brought the day he was wounded. She said he suffered terribly groaning all the time the surgeon did not think he would live, she asked if he had a family; he says "oh no! I was a school boy. I am only 21- but that my mother or sister were home." The next day he was more comfortable. If his Grandmother could only sit by his bed, bbut he lives Miss Hill. Rufus the servant is home waiting upon us can't do anything as good boy Gustavus thinks I might better take him home with me. He can take care of horses, and loves children, in fact can do almost a young girl could- but I do not know as it would be best, what do you think of it? Could I get him through without any trouble? We allow no one to see Rush..." 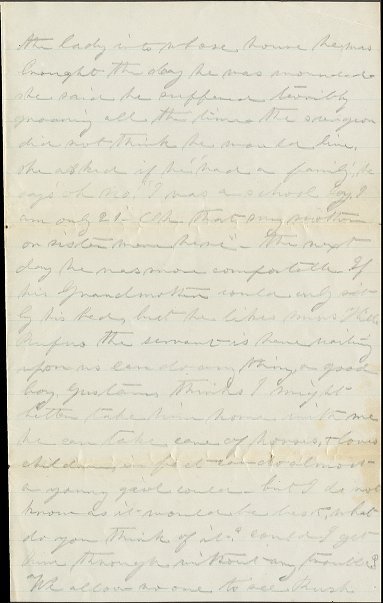 "...only those that take care of him. There is a large place in the wall, here near where I sit, where one shall come in from the rebels and from the window alone where Rush lets me see the battle ground of Wed. and where Gen. Reynolds was killed- All the missing and suffering here. how many mothers here come to find their sons, some died the day before and considerable other in the Hospitals suffering..." Letter trails off, but is too light to read.

Unfortunately, this story does not have a happy ending. Rush died a few days later, with his mother by his side. Letters of condolence and remembrance poured into the Cady home. One read as such:

I received through your brother, Capt. Palmer, the photograph of your son and am much obliged to you for the favor. It is a faithful likeness and brings vividly to mind his kind and pleasant face. My recollection of your son is of a most delightful character. I shall ever remember with interest the several interviews I had met, whilst he law wounded in our town. I met him the Sabboth after the battles, for the first time. Even then I though his recovery doubtful. I seemed to gain his confidence immediately and he conferred with me as freely as if I had known him for years. He spoke of his early religious experience his wonderings from duty, his restoration to the fold and of his hope in Jesus. He appeared willing to commit himself into the hands of God and to lean upon his promises. I called to see him several times again and he was always glad to meet me. He impared so much that with others I began to cherish the hope that he would recover. I did not know that there had been a change for the worse, until I called and found his dear mother by his bed-side. I was gratified to meet you and to assure you that I sympathize with you in your affliction. You are sustained in your trial by the hope that your son has gone to that better land, where there is no more sorrow, nor pain, nor death. You have a stronger tie than ever to bind you to heaven, and, I know, that consolation will not be denied you, if you m only reverently say, “Not my will, O Lord, but thine to be done!” With my best wishes, I remain most cordially Your friend, 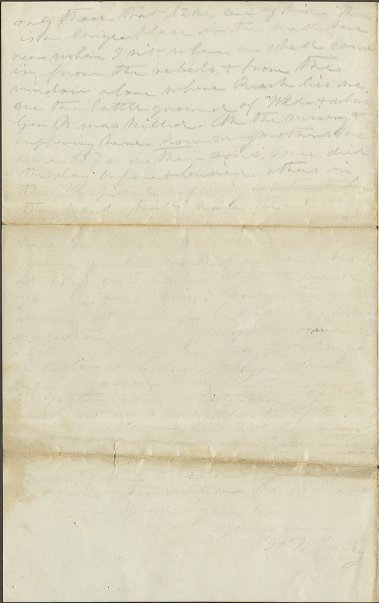