Henry Welch was born in 1844 in Cayuga County in central New York, and matriculated into Hamilton as part of the class of 1864. However, only a year into his studies at Hamilton, he left to join the 123rd New York Volunteer Infantry as an 18 year old. Welch was present at the Battle of Gettysburg, positioned on Wolf's Hill and Culp's Hill, and witnessed a deadly friendly fire accident in the early morning of July 3, the third day of the battle, which highighted the tense atmosphere and confusion of the battle. He described the scary scene in a letter to Aunt and Uncle on July 15, 1863. He was later wounded at the Battle of Peach Tree Creek in Georgia on July 20, 1864, but survived the war. He later moved with his family to Cedar Rapids, IA. He passed away on May 20, 1925 at the age of 83. 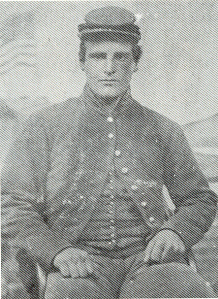 Photo of Henry Welch, taken in Virginia in 1863