The Battle of Harper's Ferry

I havent time to write more than a word to night, just enough to keep you posted. It seems that we are destined to continual defeat. It was proposed to take our Regt. to Winchester a day or two since, but it is well that we did not. The tower is now in ashes and the troops have fallen back here. Troops are rapidly concentrating here and there is a prospect of smelling powers very soon." 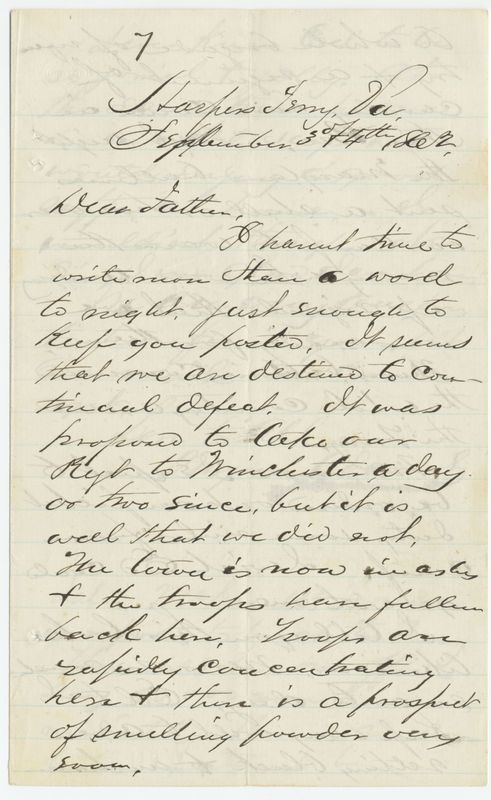 "A whole brigade of infatnry and a regiment of cavalry have come ______? Last night the Maryland batteries sent a shell or two over our Camp to warn the enemy who were sending of signals that we were ready for them. These batteries commenced the whole country around the Ferry. Tomorrow I expect to be ordered out on picket duty, some miles from camp. I wis Ed could go with me. I tell ou tis looks like war, never so much so as today. Ed and I keep very well and are getting and unshaven. Never knew Ed to be so jovial and jolly. At the same time he once in a while says he would enjoy a good supper at house. I wouldn't though, No sir, I'm glad I'm here. We are very anxious to hear from you but no mail has come yet.

Son to all, Myron Adams"

"Later. McDowell's division is reported to be at the Ferry. Then will be, our officers say 50.000 men here immediately. There is an intense excitement here...." (continued on pg. 4) 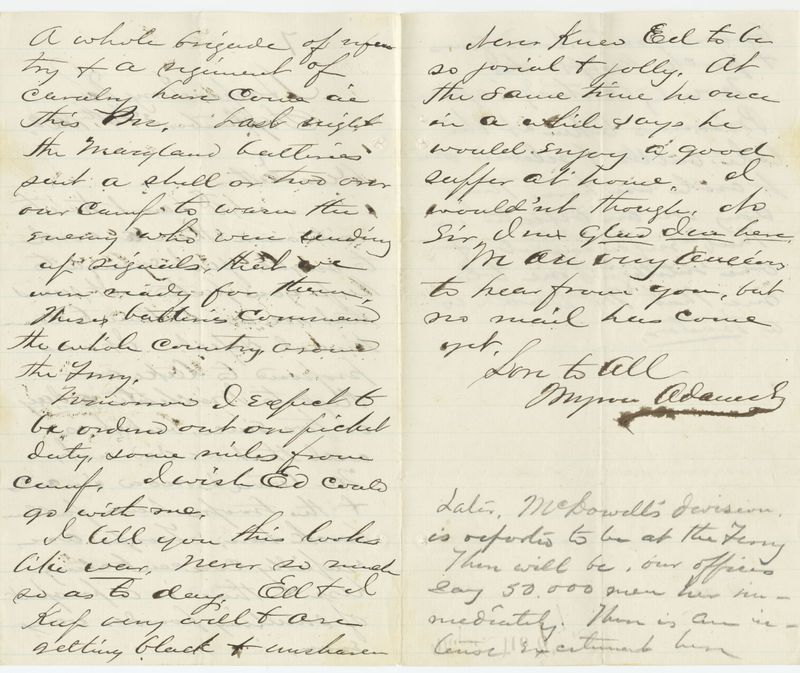 "....orders are to load guns and pack knapsacks, twenty cartridges apiece. Prisoners taken at the late-battle and released on parole are here. They say we are defeated in that-engagement and one intelligent one told me that McDowell is a traitor." 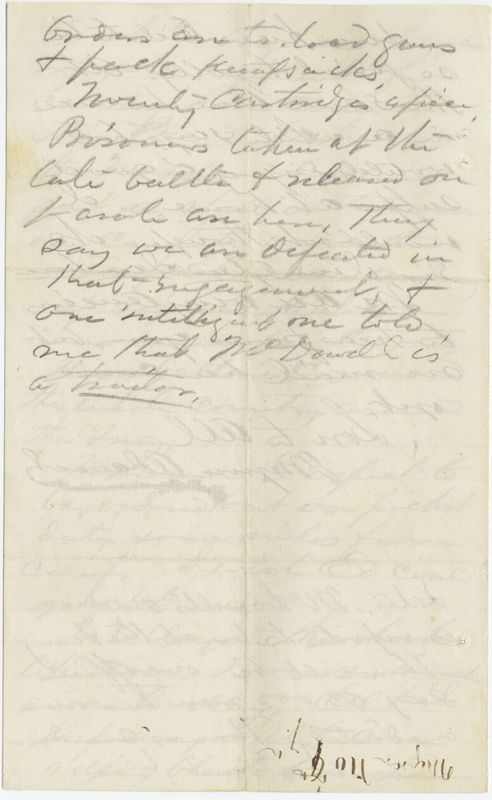 Surrounded by General Thomas "Stonewall" Jackson's Confederates, the Union garrison at Harper's Ferry surrendered the town, and the valuable arsenal in it. Instead of being sent to a Confederate prison, the men of the 126th NY, including Myron Adams, were put on parole, a common practice early in the war where the two sides, in order not to expend valuable resources imprisoning prisoners of war, made the captured soldiers sign a document vowing they would not take up arms for a certain amount of time. So, to serve out their parole, the 126th NY was sent to Camp Douglas in Chicago, where they spent their time training and drilling, knowing that they would have to redeem themselves and shed the nickname "The Harper's Ferry Cowards." The 126th NY would indeed earn the respect of the entire Union army at the Battle of Gettysburg. On the fields of Pennsylvania, the 126th NY, under the command of General Willard, charged a mass of oncoming Confederates, delaying their sweep up the Union line on Cemetary Ridge, and allowing the Union time to reinforce their valuable position on the high ground. 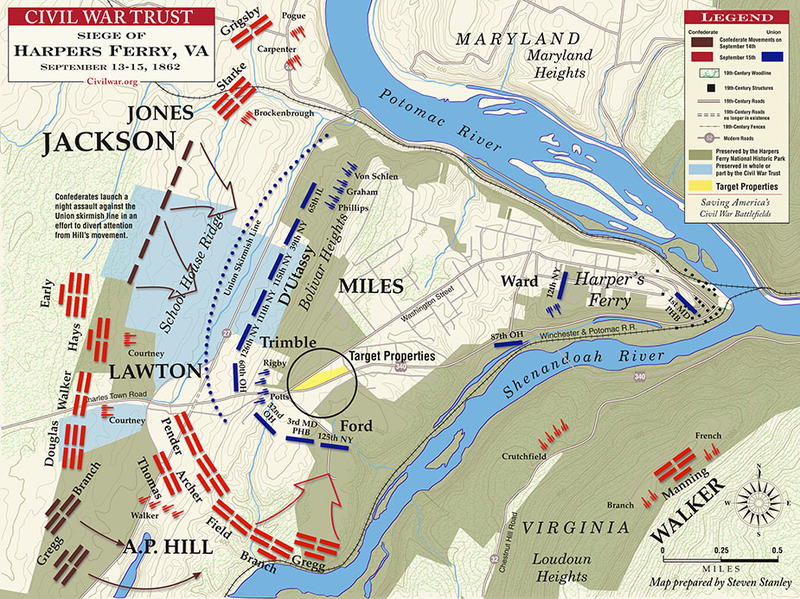 Map of the Battle of Harper's Ferry (look for 126th NY)

Stonewall Jackson is supposed to be upon us. Our pickets are driven in. We have been laying upon our arms all night in speculation of a battle. Heavy firing has been heard and reinforcements are rapidly pouring in from Washington. It is predicted that this will be the scene of a great battle within a day or two. Jackson is known to have been within 12 miles last night." 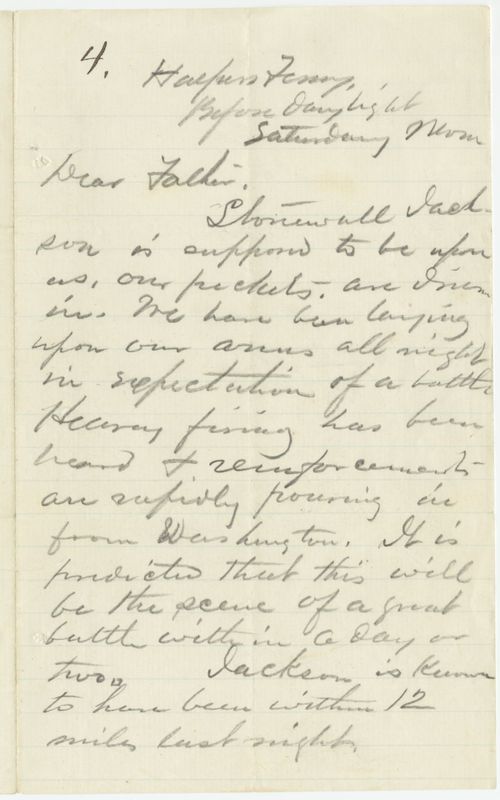 You are informed before this by the New York papers of the battles at Harper's Ferry, and of the fact that the large force there were taken prisoners. On Friday last our Regiment marched to Maryland Heights and early on Saturday morning began fighting the enemy. They were established in great force there, and after the first engagement lasting hald an hour or so we retreated about two hundred yards...." 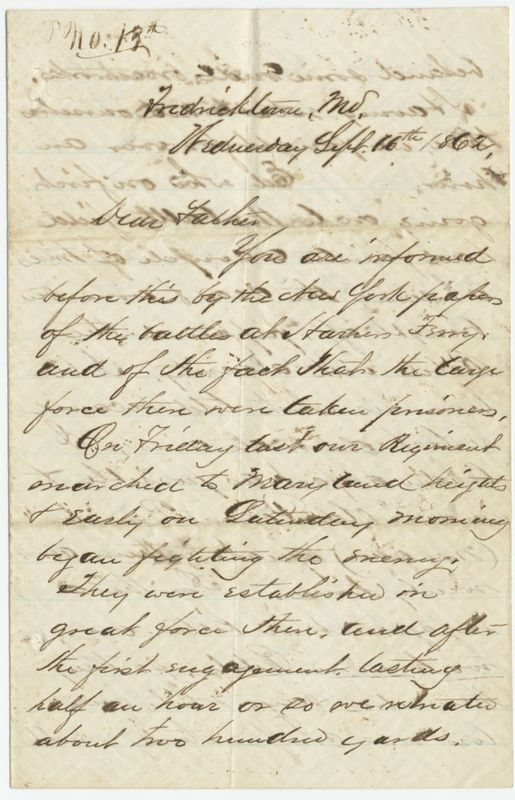 "...behind some rude breastworks. Having established had ourselves there, we fought for over an hour. Ed who on first going on to the battle field had fainted a couple of times at seeing the dead and wounded brought off, peppered the Rebels with alacrity. I believe his shotes told because he took deliberate aim. I loaded as fast as possible and made "Old Parson Barrowlow" (my gun) speak to them about twenty times. In this engagement we killed over two hundred Rebels, so they themselves say. While our loss was coparatively small, they succeeded in flanking us and after an hour's fighting we retreated, our colonel having been wounded, as I was walking off I saw Sheldon carrying Sackett who had been wounded. I went to his assistance and assisted in carrying him three miles over a rough mountain path. I was nearly dead with fatigue there since I had been scouting until midnight the night before, but I went up the mountain to fight again. Then we retreated to the Ferry. The enemy planted batteries all around us and began shelling us on..." 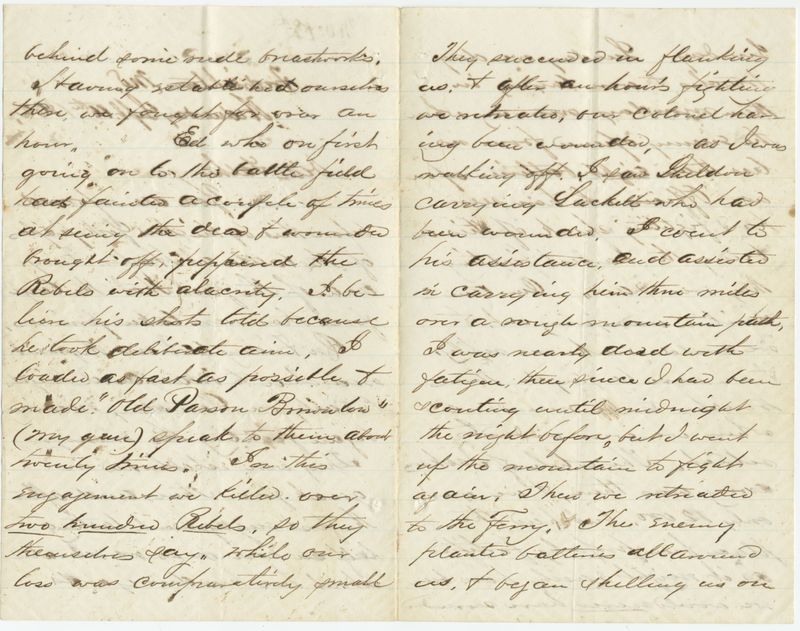 "...Sunday. Sunday we dug breastworks and were laying in them Monday morning when the enemy opened from no less than eight batteries upon us. Officers who have seen hard fighting speak of this as being the hardest fighting they ever saw. our ammunition was giving out and we could make no reply and we were laying in those trenches to be murdered when we were ordered to retreat. The whole of Jackson's army was there and we were only 12.000, but had the place been properly fortified as it might easily have been we would never have surrendered. The fact is we were commanded by a traitor, but he was struck by a shell and has gone to a higher than a military court martial. I never imagined such horribly mangled bodies as these shells make. Well, although the bullets and shells have been as thick as rain around us, God has wonderfully preserved us. We marched twenty miles yesterday and must march to Baltimore. Will write again.

Myron Adams would never make it to Chicago though. He stayed in Baltimore, after nursing a wound of his, to work in the Medical Director's office as a clerk. He then joined the US Army Signal Corps, with whom he would eventually rise to the rank of Chief Signal Officer of the Department of the Gulf in New Orleans. 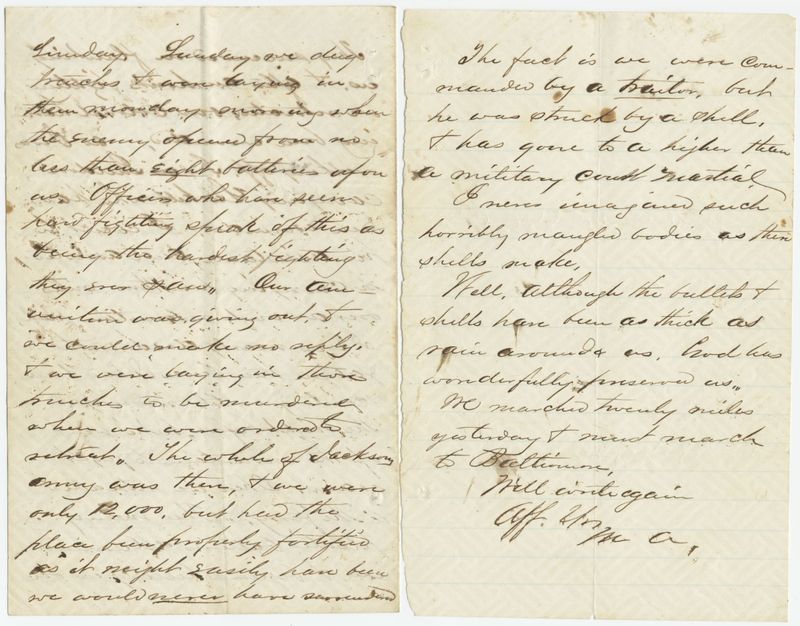